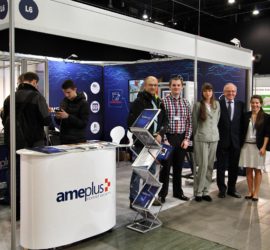 The SYSMEL electromagnetic mill and the robot drawing the faces of guests were the biggest attraction of our stand. Many exhibitors presented a number of innovations during Automaticon organized on 14-17 March 2017 at the EXPO XXI Center in Warsaw. However, in one area, the current edition was a little different in refference to previous years – the number of industrial robots were presented. In total more than fifty robots of fourteen manufacturers, with ten of them having their own stands. According to organizer of the fair: Robotic applications were also demonstrated at the stands of the integrators and in the technological equipment offered. Some of the robots were featured in typical applications […]